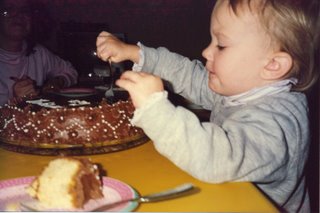 Cake for everyone!
Go ahead, have the big piece!


What with one thing and another, your host has proven to be the kind of unreliable individual who bakes a birthday cake (the one in the photo is much prettier than the current cake) instead of attending to important ceremonies here at Whine Central.  On the other hand, cake!

By acclimation, the fabulous Debangel wins the coveted Elevated Risk of Mullet Award, for her bold decision to answer all of the pop quiz questions!  Brava!  We are particularly taken with the idea of a turtle flash mob, which should totally be a permanently featured video of this particular organization.

Sarah wins the Ick on the Sick Award, for strep with no symptoms but congestion.   A medical mystery.  Kudos to Esperanza for advice.

The Workplace Tech Fail of the Week Award goes to Sarah's boss, who has idiosyncratically decided to use Hotmail instead of the Official Email, and the hotmail account decided that everything from the office was spam.  Coooool!

Liz, she is not Mystery Mommy for nothing.  In addition to her considerable mad doorbell skillz.  :)

The Enlightened Response Award goes to Esperanza, who says:  "The last question is scaring me, so I refuse to answer."

Esperanza's Sweet Baboo wins the Cowgirl Award, and an honorary position with the Posse, following a little horsy acting up at the lesson:  "Sweet is a genuine cowgirl, held on through the whole bit, and didn't even cry. She admitted later that she was scared, but was happy to get back on the horse. She is a tough cookie."

Much love and get-well thoughts to Miranda,  who was laid low in the fancy-ass hospital.  We are sure it is a lovely hospital, but we need you to be feeling better ASAP.  xoxoxo

Please join us next week, when the delightful Esperanza will host the turkey-related festivities!

Labels: Awards, Your patience is appreciated